Imagine analysing all these billboards (even if you can read Chinese)!
In a place like this in Taiwan, do people still take in all this information on these signs? Or do they just ignore them?

This seminar so far has been very intriguing for me, and I’m not just saying that because that’s what people are supposed to say that after a typical seminar. The focus on not just signage, but the East Asian languages on some of the signs around the local Bay Area, is very specific yet fascinating. One would hardly pay any attention on these “minor” details in life without some considerations and reminders. As a person who loves to travel and pay an unusual amount of attention on my surroundings, the topic of this class is certainly appealing and satisfying to me. And yet, switching my attention on everyone else, there’s a question that hopefully I can find an answer by the end of the year. That is, by how much do people take notice of these signage around us, whether it be in East Asian languages or in general?

Of course, the way each person perceive is different from each other. One may focus more on the road instead of the signs, or vice versa. Or one may not focus on his/her environment at all. However, I’m more interested in how much on average does each person pay attention to these signs. As we trek across the different places around Berkeley, we pay close attention to signs in different languages. These signs may all serve purposes in catching people’s attention as they walk by. But, to what extent do most people generally recognise and identify these signs? And how much effect does these sign have on the people? Normally, even we the observers may walk across streets without paying attention to them, due to the classes we might have or that bus we need to catch soon. So, how much of the signs’ message goes to their mind as they walk across? That should be my ultimate question for this class (with a little connection to psychology, of course).

First of all, I have to say how much I love this post. Humourous, satirical, and extensive, I have a feeling that I will soon subscribe to this blog for future posts. Scout made a great point about the fact that NYC has a lot of things but not everything. However, living close to the San Francisco, the largest city (in terms of highest density) after NYC (and the first Chinatown), I have a good response to his attempt to find an “Orientalism-on-steroids” Chinese restaurant: he can probably find one here, in SF. I’ve been to a few restaurants in SF Chinatown that nearly resemble what the director expected to find: wooden decorations, red wallpapers, etc. In fact, if one ventures on Grant Avenue, the main thoroughfare in Chinatown, he/she can instantly find the over-the-top Oriental architecture; it’s everywhere in SF Chinatown. As a person who spent about half of his life in Asia, I have to say this is out-of-place even for any Asian immigrants (except for the endless Chinese signs, those gave me nostalgia from Taiwan). It seems like I have entered an entirely different world that’s not Asia or anywhere.

Aside from the minor complaint, the remarkable architecture of SF Chinatown and the Chinese restaurant seen in Men in Black III gives me a lot to study about the linguistic aspects behind these places. Drawing on the readings earlier, especially in terms of index and symbol, one can observe how a multitude of visuals in these oriental-style places infer to the visitors. The many signs and small billboards across Chinatown can be seen as a form of indices that tell the people what they exactly are; whether they are restaurants, shops, or other services. Meanwhile, the significant architecture like the Oriental rooftops and decorations seem to be symbols that imply this place known as Chinatown. Drawing from such comparisons through the picture below, I can separate the symbolic components of the place from the indexical components and identify how a typical person perceive the place when he/she first walks into Chinatown. While how one perceives the oriental architecture may often be based on stereotypes and not authenticity (as argued by ethnic studies), this is an interesting study on how we interact with the cultural environment, since every one of us is naturally based so much of our judgment on stereotypes (even if we try to diminish or minimise it).

Note the signs and the oriental architecture (especially those eye-catching lamps).

Back in Berkeley, these principles can be applied to the eateries around the campus as well. From the Asian Ghetto mentioned before, some of the establishments inside are generally recognised as “authentic,” while others not so. Aside from the cuisine, perhaps the indexical and symbolic aspects of these places may also help the people make a (true or untrue) depiction of these eateries. For example, take a look at Thai Basil. The Buddha statues on display right behind the cashiers, along with not one but two portraits of the King of Thailand, can give the customers an impression of the restaurant. Even before buying and tasting the food, many visitors might already have a presumption that this place is quite “authentic.” This is perhaps the symbolic aspects of this restaurant at work. While I truly enjoy the food here, I wouldn’t have the ability to determine if this place is authentic simply because I’m neither Thai nor an expert in Thai cuisine. 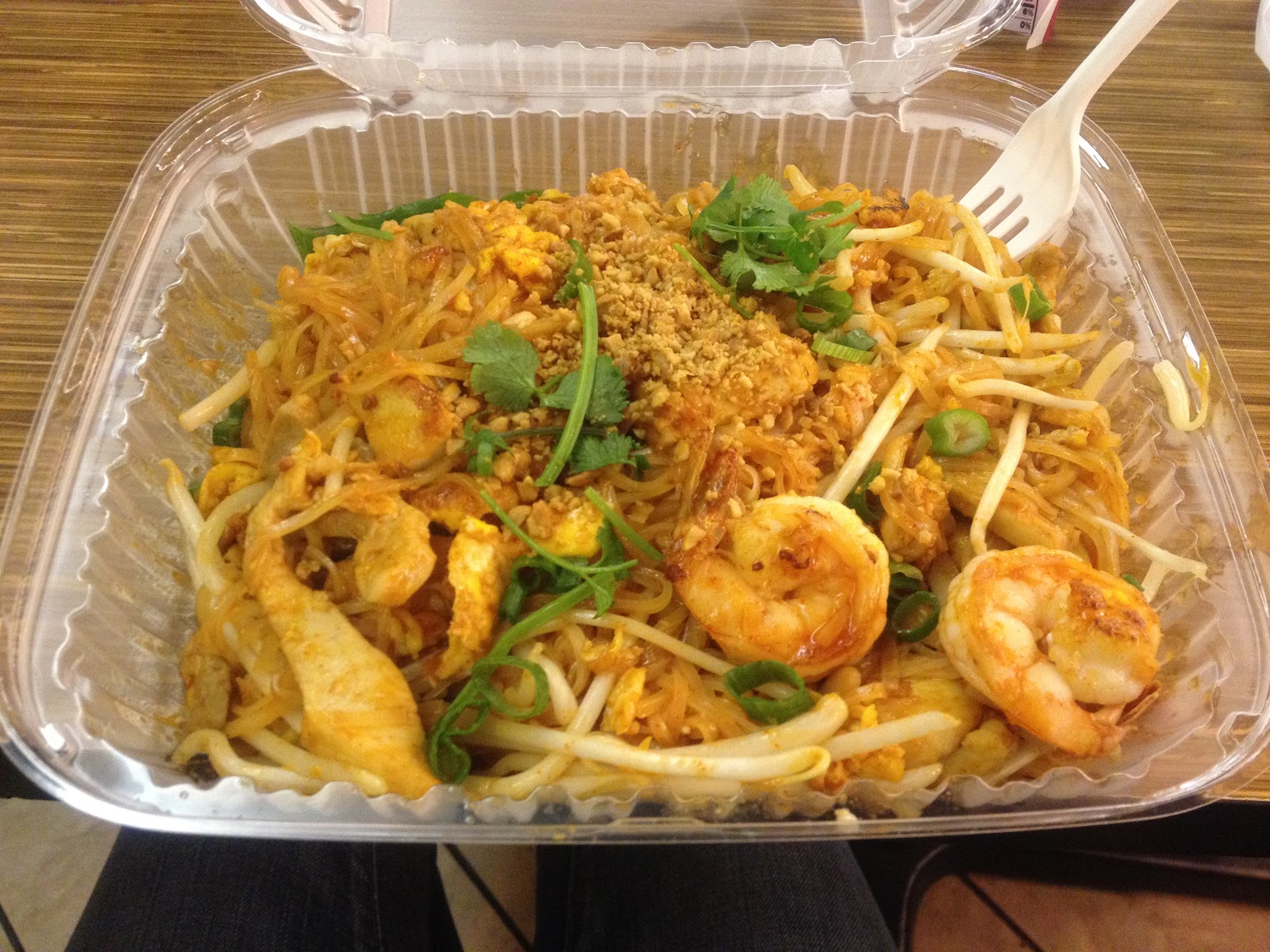 While I’m trying to find/take a picture of the Thao King portrait and the Buddha figures, this should keep everyone’s mouth watering for now.

Interestingly, if we look to the restaurant right next to it, Steve’s Korean BBQ, the general consensus among the students is that this place is not so authentic. From the billboard outside to the menu sign inside, however, it seems to quite Korean (to those who don’t know the language) with all those Korean characters on them. So, what makes people think it’s actually not so authentic? I would say the people serving the restaurant play a huge part in determining that. Most people may have noted the interesting sight after going into the restaurant for the first time: Mexican music in the background, four Hispanic people serving the place without an Asian in sight (once again, the natural human tendency to racially profile). This would doubtlessly give rise to the thought that this might not be the most authentic Korean restaurant around Berkeley. In this case, the symbolic aspect actually applies to the people serving as well. We can analyse that the music and people imply symbolically the authenticity of this restaurant. As to the actual authenticity of the food, I’d say that I have a bit capacity to make judgment on Korean cuisine, after living in a community with a Korean majority (and supermarket): the food is truly not that authentically Korean, though still the BBQ is still quite enjoyable. Steve’s “Korean” BBQ? I have been told that the way to say Korean BBQ in Korean is actually not how the characters on this board says.

As I attempted to research on the famous-around-the-campus Asian Ghetto, I found out that there are not much I can grasp on the Internet or basically anywhere. Like many restaurants and casual dining places that do not (or have not) attain the status of being a world-famous eatery (like Chez Panisse, which is also near Berkeley!), Asian Ghetto has scarce amount of academic or recorded history. Nonetheless, this does not mean that it doesn’t have a folk history. From many review websites (particularly Yelp, again!), there is a rich narrative and commentary on the reviews, especially among current and former students. Those who graduated from Cal reminisces the place once known only as “Durant Food Court” and nothing else, and those among us who still live in this wonderful city continues to boast the place’s awesome Asian and not-so Asian foods. As I look into the every corner of this thriving, student-supported place, the unique culture of Berkeley is showing up bit by bit.

Credit to the Townsend Centre for the Humanities (at Berkeley!). I would never be able to take a high-quality picture like this.

From its appearance and people’s commentary, the Asian Ghetto/Durant Food Court seems to be around since forever. The small bloc seems to blend in well with the rest of the eateries on Durant Avenue. One reviewer on Yelp, going by the name Chiara A., provides a wealth of information about the past of Asian Ghetto. She recalls that this place used to be “simply Durant Square,” with international eateries including Mon Pere, an ice cream place serving “fresh, rich, and creamy ice cream made daily.” Another reviewer, Tiffany T., named this place in 2012 the “Chinatown of Berkeley,” mentioning the existence of Korean, Vietnamese, and even Ethiopian (??) cuisines. Aside from the fact that Ethiopia is not even remotely Asian, I’m quite surprised to find out there’s even an Ethiopian restaurant there (there’s a real Ethiopian restaurant down Telegraph, I think). Unless she meant that Cal Gyro place, that is.

In an attempt to find former spots that occupied the current Asian Ghetto, I’m quite surprised to find out that most of these restaurants have been around for years, and maybe even decades. The only former establishments I can find is the ice cream place previously mentioned and an unknown place called “Meesha’s.” This seems to reflect a historic culture of Berkeley: things stay here for a looooong time. The places across Durant, Top Dog and La Burrita, have been around since the 1960s. In contrast to many other college campuses (and campus towns), the places at Berkeley are seen and visited by generations of students. After all, Cal is the oldest UC and the oldest public university in California.

If I have some spare time, I would certainly like to find out more about Asian Ghetto and its surrounding restaurants on Durant. Being an amateur historian, I chose Berkeley partly because of the history behind it (and the Bay Area). It’d certainly be exciting to learn more about this place I now call home, especially the rarely-researched parts of the city.

Berkeley, comparing to the most of the state and country, has quite a diverse range of language present in the city, showing up on commercial signage, banners, and more. This is not to say that there’s no other places with diverse languages on signage. California, being one of the most diverse states, have a bunch of cities with similar phenomenon. The fact is particularly apparent in commercial areas near UC Berkeley campus, such as the multiple food courts and restaurants on Durant Ave. The presence of Asian languages in some restaurants on Durant even earn the name “Asian Ghetto” among the students. This should be partly caused by the presence of students in Berkeley. Since the student population is very diverse, including Americans from different ethnic backgrounds as well as international students, the demand for different ethnic restaurants and shops soon formed this interesting presence of multilingual signage. Signs in languages like Chinese, Japanese, Korean, and even a bit Hindu can be seen along the streets of Telegraph, Durant, etc. Being a person who lived in Taiwan before, the presence of some Chinese text is quite familiar with me. I would not find a language invisible or missing, but there may be certain language that might not be present despite the people’s presence in the city.

Welcome to your brand new blog!

This is a sidebar and can be changed by going to Appearance > Widgets in your dashboard.